Aryl ketones are photolabile caging groups if installed at the N7 position of guanosine or the N1 position of adenosine whereas common photocaging groups derived from the ortho‐nitrobenzyl moiety were not suitable. 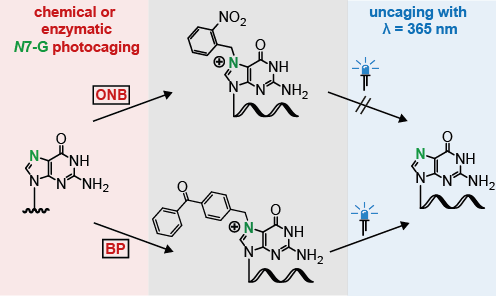 DNA-encoded libraries are increasingly used of drug identification. However, the reactivity of the DNA imposes limitations on the choice of chemical methods for encoded library synthesis. Amphiphilic block copolymers covalently functionalized with sulfonic acid moieties in the lipophilic portion assemble in water and locate the Brønsted catalyst in micelles. These acid nanoreactors enabled the reaction of DNA-conjugated aldehydes to diverse substituted tetrahydroquinolines and aminoimidazopyridines by Povarov and Groebke–Blackburn–Bienaymé reactions, respectively. 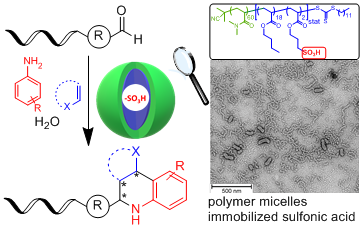 Small DNA circles can serve as templates for rolling circle amplification (RCA), which is a common and extremely robust amplification mechanism for nucleic acids. We discovered a strong template length-dependent amplification efficiency bias of RCA with the same periodicity as B-DNA.

A cytidine phosphoramidite with protected nitroxide spin label: Synthesis of a full-Length TAR RNA and investigation by in-line probing and EPR spectroscopy 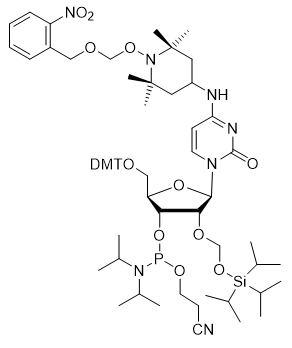 Nayan P. Agarwal, Michael Matthies, Bastian Joffroy, Thorsten L. Schmidt
ACS Nano 2018, DOI:10.1021/acsnano.7b08345
In this work, we have explored the possibility to synthesize the complementary sequences to single-stranded gap regions in the DNA origami scaffold cost effectively by a DNA polymerase rather than by a DNA synthesizer. 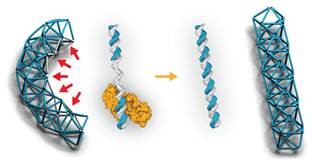 Methyltransferases are powerful tools for site-specific transfer of non-natural functional groups from synthetic analogs of their cosubstrate S-adenosyl-L-methionine (AdoMet). We present a new class of AdoMet analogs containing photo-caging (PC) groups in their side chain, enzymatic transfer of PC groups by a promiscuous DNA MTase as well as light-triggered removal from the target DNA. This strategy provides a new avenue to reversibly modulate the functionality of DNA at MTase target sites.

You have declined cookies. This decision can be reversed.

You have allowed cookies to be placed on your computer. This decision can be reversed.